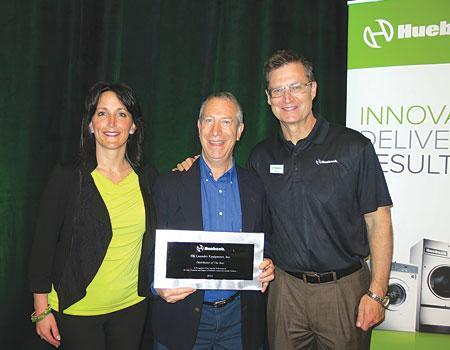 “Fifty years in business starts to become a legacy,” said HK President Karl Hinrichs. “HK was founded on April 1, 1967, by my father, Reed Hinrichs, and our neighbor, Mr. Jim Kerr.

“The story is a typical American dream,” Hinrichs continued. “My father was an IBM salesman at the time, and Mr. Kerr was a manager for Time/Life magazines. Mr. Kerr owned a couple of laundromats and was looking into the new, modern, frontload Wascator washing machines from Wascomat. The only hitch was that Wascomat wanted him to actually sell the washers, not just purchase them for use in his stores. Mr. Kerr took the idea of a new distributorship to my father and asked if he wanted to become partners and form a company together. As my father re-tells the story, it took him about five seconds to jump at the opportunity to become his own boss. He was so committed to this idea that he even asked his mother-in-law to borrow the money to help him form the business.”

And so it happened. HK –for Hinrichs and Kerr – was formed, and 50 years later the business is stronger than ever.

During the last 50 years, HK has grown from the relatively humble beginnings of just two employees to currently having 20 staff members. Four years after forming HK, Kerr retired to just operate his own self-service laundries. During the last five decades, HK’s distributorship has grown exponentially. In fact, during that time, HK Laundry Equipment has retooled or built more than 600 vended laundries in the relatively small territory serving the Hudson River Valley and the state of Connecticut.

In 1995, Reed Hinrichs retired from the business and passed it on to his son, Karl, who took over the leadership position.

“In looking back, some of the highlights of the company include the fact that HK was a very early adopter of leasing laundry equipment to the on-premise laundry market,” Hinrichs noted. “HK also was one of the first distributors to create an e-commerce website. We were a little ahead of our markets – we had photos of parts online back when most of the laundromat owners didn’t have high-speed internet service, so the site took a long time to load for many.

“We probably pissed off more customers than we actually gained back then,” he added, with a laugh.

Despite perhaps being ahead of the technological curve, the industry eventually caught up to HK Laundry Equipment, and in 2013, the company was presented with the Huebsch Distributor of the Year Award.

Throughout the years, HK has won repeated recognition and praise from all of its suppliers, and to be named the Huebsch Distributor of the Year was a high honor and a truly special award, according to Hinrichs.

HK also has strived to create one of the most informative websites available to the self-service laundry industry. In fact, hklaundry.com features more than 40 videos – with topics including technical how-to repair videos, what makes a good laundromat location, and why drainage basins are important in vended laundries. The HK site also boasts informative articles covering such key issues as how laundry owners should go about raising their vend prices and why customers may choose to visit one self-service laundry over another. In addition, the company’s website features a section called “HK Happenings,” which includes contact forms for sales and service seminars, as well as a calendar of industry events.

“At HK Laundry, our sales model is based on consultative sales,” Hinrichs said. “We work hard to help educate our customers so that they are well-informed consumers. We educate our customers to operate the best laundromats possible and to recognize the most efficient and durable commercial laundry equipment available. Our commitment to our customers will help us to remain a proud Huebsch distributor long into the future.”