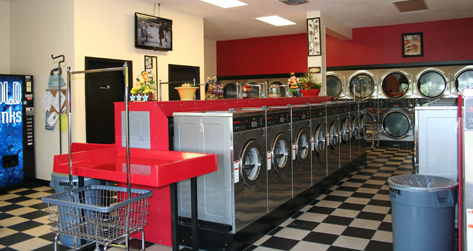 After years of unclogging other people’s pipes as a licensed master plumber, Florida’s Willy Gibson turned his attention to a completely different type of pipe, as the co-owner – along with his wife Margie – of a Pensacola-based smoke shop, Big Bubba’s Discount Tobacco.

“Willy is a plumber by trade,” Margie explained. “However, that is more of a side business now. It has become less prominent as he has gotten a little older. To pick up the slack, we purchased the tobacco store three years ago. We mainly sell cigarettes and e-cigarettes, but we also offer snacks and drinks as well.”

With one retail business going strong and long-time service business on the side, Willy and Margie were looking for a second retail business that would enable them to serve the Pensacola community, while also giving them a schedule flexible enough to attend to their other businesses, as well as have time for family.

During an online search, they stumbled upon Michigan Coin Laundry, also located in Pensacola. The 2,000-square-foot self-service laundry had been closed down for about two years; however, the Commercial & Coin Laundry Equipment Co., a local laundry distributor, had recently purchased the building and was planning to gut it, renovate it, update it and sell it.

“Willy was Googling business opportunities in our area, and the demographics for the laundry were just awesome,” Margie noted. “It was a good opportunity for us – flexible hours and interaction with people. Plus, the big advantage to owning the laundry, as compared to the tobacco store is that the laundromat is rather self-sufficient.”

The couple purchased the store in April 2013 – and last August the new and improved Michigan Coin Laundry re-opened for business.

“Our distributor, CLEC, handled the gutting and renovation of the store,” Margie said. “We were in charge of the color scheme, the décor and the flooring.”

The store’s color palette features eye-catching black-and-white checkered tile, along with a red accent wall trimmed in black to highlight the dryer area. The other interior walls are painted the same off-white hue as the ceramic tile flooring.

“When you walk into our store, you feel like you’re walking into someone’s home, not a laundry,” Margie explained. “It’s not just a bunch of machines and that’s it. You’re at home, and you’re comfortable.”

The stores walls are complemented by decorative laundry signs, a number of funny and inspirational quotes, photographs, and other hangings.

“Our back wall where our dryers are has become our family portrait wall,” Margie said. “Currently, there is a photograph of my mother in law, a photo of the four generations of girls in the family and a picture of our entire family.

“And, on the wall that our 80-pound washer backs up to, we have created a ‘puzzle wall,’ where we have hung up completed puzzles that our staff and our customers have worked on together.”

Michigan Coin Laundry is situated in a popular strip mall on Pensacola’s busy Michigan Ave., which means that the Gibsons’ new business benefits from a high-profile, high-traffic location. The area is a hub of activity, with a number of other thriving businesses, such as supermarkets, restaurants, gas stations, dollar stores, nail salons and so on.

Although open less than a year, the store has built a strong walk-in clientele – including a large percentage of seniors, as well as military personnel, since the coin laundry is located close the Pensacola Naval Air Station.

“We get a lot of renters in here,” said Margie, adding that the store also caters to its fair share of tourists and seasonal workers.

Willy and Margie have gotten the word out about their new business through signage and advertising in the local newspaper. They’ve also implemented an in-store volume discount promotion, where customers will receive a 10th wash or dry after purchasing the first nine.

Margie explained that they plan to add some online marketing to the mix in the near future, but she added that a lot of their business growth has come through good, old-fashioned positive word-of-mouth.

“Our regular customers are really proud of the store,” she said. “In fact, if a customer spills something, our regulars will say, ‘They have towels up at the counter, if you want to grab one and wipe that up. They like to keep this place clean.’

“Our regulars have really impressed us. They will tell people, ‘This is not your everyday laundromat, and we want to keep it that way.'”

Margie continued that Michigan Coin Laundry tries to differentiate itself from other laundromats in the marketplace through its one-on-one interaction with its customers.

“We have a very open format, where our customers can see what the attendants are doing,” she noted. “So, if they have any questions, we can offer help immediately. Through that interaction, we’ve completely changed the image of the old store that had been here before.”

The couple owns the store’s beverage vending machine, as well as its snack vendor. In addition, they’ve negotiated a 50 percent split of the profits on a pinball machine, a shooting game and touch-screen video game with a local entertainment company.

The Gibsons are slowly building their store’s wash-dry-fold service, which is priced at $1 a pound.

“It’s starting to pick up more and more,” Margie added. “For seniors and military, we offer a 10 percent discount on our wash-dry-fold and drop-off drycleaning programs.”

What’s more, Margie added that she and Willy are planning to seek out a few commercial accounts in 2014.

With two full-time staffers and one part-time employee, Michigan Coin Laundry is fully attended. The store is open from 7 a.m. to 9 p.m. Monday through Saturday, and 8 a.m. to 9 p.m. on Sundays.

And with both businesses running smoothly, Margie indicated that a second coin laundry for the entrepreneurial couple might not be out of the question. In fact, she added that she and her husband are currently looking at buying another Pensacola store.

“The owners are looking to retire,” she said. “If we were to get it, we would gut it and remodel – just like with this one.”