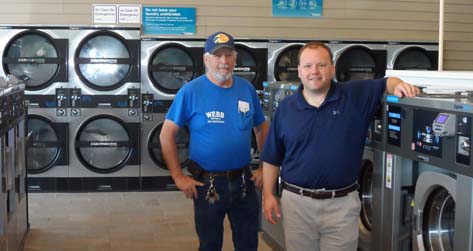 When it comes to a new business venture, Danny Delmarco is a big believer in doing one’s homework.

So, when he and his business partner, Lloyd Webb, decided to open a self-service laundry – in a building co-owned by Webb and Delmarco’s father, Robert – the first order of business was to do their due diligence.

“I educated myself, visited laundries all over the area and talked to distributors and vendors,” explained Delmarco, whose Seneca Express Coin Laundry is located in Seneca, S.C.

“We were rookies in the laundry business,” Delmarco noted. “So, we didn’t know how to put the laundry together. Russ designed the plan and we tweaked it. I think the most important part is research. You can’t just jump into something like this.”

Delmarco knew that he and Webb wanted to open their new laundry business sometime in the fall of 2012, so he began seriously studying the industry in January of last year.

“I took the time to plan it out,” he said. “It may take eight or nine months. I visited so many different laundromats. You may have to drive to a few different locations to look at what you want and to plan out what you need.

“For example, with us, we never would have installed automatic doors if I hadn’t gone to a store in Gainesville and seen how well they work,” he added. “And, as for the vending machine we currently have, at first I was thinking in a completely different direction – then I visited a store in Tennessee and saw the machine that we ended up getting for our laundry.

“Originally, I had some ideas for a children’s play area, but I quickly discovered that we just don’t have the square footage for something like that. All of these little things I learned by traveling to other stores. You might think you’re wasting your time, but you’ll pick up something new at every laundry you visit. With every little piece that came along, I learned from each different laundromat. It’s amazing how this store fell into place.”

Although a newcomer to the coin laundry business, Delmarco is an expert when it comes to local real estate, having been involved in the commercial and residential markets since 1995, as well as working full-time as a real estate agent.

By contrast, Webb, Delmarco’s partner, owns a heating and air conditioning business, which is conveniently located next to the building in which Seneca Express is based.

In addition to the laundromat, the 14,000-square-foot building that Delmarco and Webb own also houses a thrift store and a music shop – each of which lease their retail storefront space from the first-time laundry operators.

“Owning the building definitely made getting into the laundry business advantageous,” said Delmarco, although he admitted that becoming self-service laundry owners wasn’t the original plan. “Once we bought the building, looked at it and started improving it, then the idea came up that it wouldn’t be a bad idea to actually own a laundry.

“It’s located on the main drag going through Seneca, and I don’t think we could go wrong, as far as having the security of the ownership of the building. We wanted to take a shot at doing that. After our initial research into the coin laundry industry, we thought it would be a good opportunity.”

No doubt helping Delmarco and Webb make their decision was the fact that the space had previously housed a laundromat, so the location already featured somewhat of a built-in customer base.

However, the two entrepreneurs weren’t looking to give the Seneca laundry market the same old thing.

“We improved that entire building,” said Delmarco, who estimated that he and Webb probably spend about 20 hours per in their store. “Everything got upgraded, include that existing laundromat. We just wanted to take it to the next level.”

That meant a full renovation.

“Yes, there was a laundry there, which definitely helped, but we still gutted the whole building and started from scratch,” Delmarco explained. “The one big surprise was that we weren’t expecting to have to upgrade the entire electrical system, but that’s what we needed to do for three-phase.”

Despite the size of the renovation, the project was completely in only five weeks.

“We started around October 1 last year and opened on November 10,” Delmarco said. “It was definitely a pretty aggressive timeline, but my goal was actually to have the store completed in four weeks.

“I invest in real estate and flip houses, and Mr. Webb has extensive experience in construction, so that background definitely helped us tremendously.”

The store’s grand opening, which was held in mid-November, keyed on a free wash, according to Delmarco.

“It gave us a chance to show customers the machines,” he said. “It was packed each day and almost overwhelming. Every machine turned five or six times a day.”

“Of course, being an existing store, there was an existing customer base there, so that helped us out,” Delmarco said, adding that he planned to begin ramping up his advertising campaign, which will include distributing door hangers among the many apartment complexes in the area.

Since opening, Seneca Express – which is open from 7 a.m. to 11 p.m. daily – has received a great customer response, with some customers traveling 30 to 45 minutes, according to Delmarco.

“Of course, we’ve upgraded the equipment,” he explained. “They’re in and out within a fast timeframe. It’s definitely more efficient and economical for the customer.”

Keeping the customer in mind, Delmarco and Webb also opted for vending flexibility, placing a coin/card system on four dryers, two 75-pound-capacity washers, all of their 55-pound washers, two of the 40-pounders and two of the 30s. This hybrid system enables those washers and dryers to accept major credit and debit cards, without removing the machines’ coin acceptance. Thus, customers can opt to use coins or cards on those machines.

“I wanted to go with a combination because everyone was accustomed to using coins,” explained Delmarco, who employs one part-time attendant. “We’ve found they love the card option, especially on the bigger, higher-priced machines.”

“Our target was to be at or around their pricing,” Delmarco said.

Thus, the laundry charges about the same for a cold wash as its competitors do for a regular wash. However, for every step up – to warm, hot and superwash – the vend price goes up a quarter.

In addition, the store boasts five flat-screen televisions, WiFi access and, of course, a very popular automatic door – courtesy of Delmarco’s fact-finding mission to Gainesville. And the owners are considering possibly adding a wash-dry-fold service in the future.

“We feel we’ve gotten rid of the stigma of the old-style laundromat,” Delmarco said. “Everyone who comes in there is just so appreciative of what we’ve done. And it makes them want take care of the store; they don’t want to trash it, because they know they finally have a nice thing going here. The majority of the people are just so happy to have a decent, secure, safe place to come to do their laundry.”

And with their first self-service laundry up and running, Delmarco and Webb are already looking to become multi-store owners.

“We’re definitely looking at expanding,” Delmarco revealed. “We’re in the process of pursuing an opportunity in Greenville, S.C., which is about an hour away from Seneca. It’s a completely different market, a larger market than Seneca. We would be hitting more of a city type of market.

“Right now, we’re in the planning phases with the architects, getting all of that drawn up. We’re looking to close on the building sometime in June. The goal is to try to have it open sometime in the fall, if not sooner.”

If history is any indication, given the speed at which Seneca Express was renovated, it likely will be sooner.