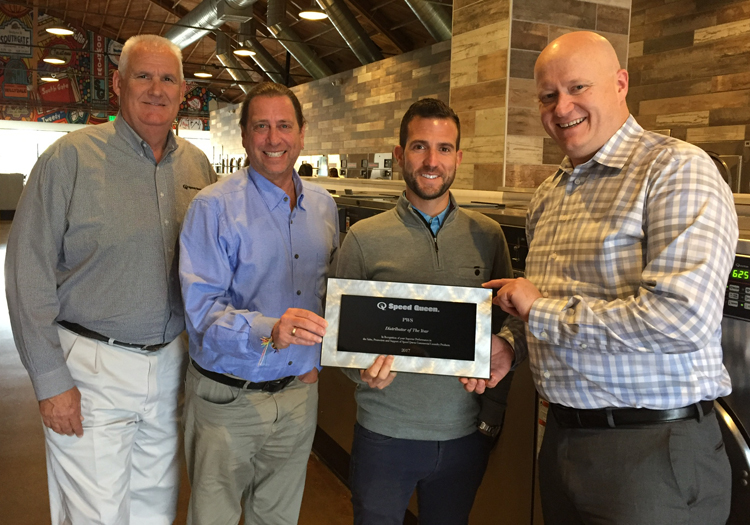 Speed Queen has presented its highest distributor honor – the 2017 Distributor of the Year Award – to PWS-The Laundry Company.

PWS, headquartered in Los Angeles, has a rich history with Speed Queen and remains one of the most prolific developers of vended laundries in the country.

“Co-presidents Brad Pollack and Brad Steinberg continue to be leaders not only in their market, but in the vended laundry industry as a whole,” said Steve Bowie, North American sales manager for Speed Queen. “They are committed to raising the image of laundromats by developing stores that are not only beautiful, but also utilize advanced technology to streamline management and deliver a high-quality customer experience. This carries on a legacy that started 50 years ago.”

Last year’s numbers are evidence of PWS’ active role in the laundromat business. The company installed more than 16,000 Speed Queen machines in 2017. Equally impressive is the customer service the distributor is known for providing; this shows in the fact that – of the 15 new vended laundries the company built last year – 11 were purchased by customers who had bought a store from PWS within the last five years.

“At PWS, we pride ourselves on the relationships we build with our clients by being trusted partners in their business,” Steinberg said. “This approach has truly been the strength of our company since its founding.”

“Winning the Speed Queen Distributor of the Year Award the same year we celebrate our 50th anniversary is something the entire organization can be proud of,” Pollack added. “This is a company honor, and not the work of just a few.”