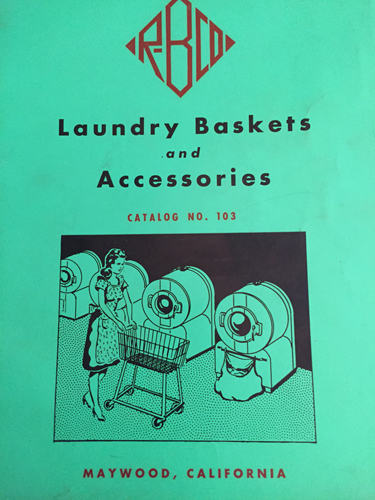 When R&B Wire Products (then known as RB Company) was founded in 1946, the self-service laundry industry was still in its infancy. World War II had just ended, and the ingenuity of product design and development had shifted from the war effort to more practical products that would improve the daily lives of everyday Americans.

Among those products were laundry carts. There was a need for a handy cart to conveniently transport laundry from washers to dryers – and R&B was there to fill that void.

By 1966, with Rea Rawlins at the helm of R&B, the company’s wire laundry carts had become a staple of the coin laundry industry, as well as the foundation of R&B Wire Products. In addition, Rawlins became entrenched within the industry and, in 1983, was ultimately elected chairman of the Coin Laundry Association’s Board of Directors, where he helped create additional value for the industry through his leadership.

Later, as R&B matured and grew, Rea’s son Rick – who had worked at the company on weekends and during summers while still in high school, welding and assembling laundry carts – had graduated from college. And, together, Rea and Rick became a dynamic team, continuing to expand R&B’s product line and support the self-service laundry industry.

In the late 1980s, Rea decided to retire, and Rick took over as company president and CEO. What’s more, Rick eventually followed in his father’s footsteps by being named CLA Chairman in 2001.

“Celebrating 70 years of manufacturing excellence is overwhelming and hard to conceive,” Rick said. “But it certainly is something I am very proud of. I look back with a real sense of pride and thanks to our R&B distributors who have been instrumental in the development of R&B over this time. A special thank you and sense of pride goes out to our coin laundry distributors who became the real foundation of R&B Wire Products, allowing us to evolve significantly over that time. R&B has always maintained its commitment to our “satisfaction guaranteed” philosophy, and that has been key to our success and longevity. I look forward to continued success and growth, and thank all of our R&B customers very much. We appreciate your continued support.”

“The company’s entire staff would like to recognize and thank Rick for his commitment to R&B’s outstanding achievement in celebrating 70 years of manufacturing success, as well as his unwavering leadership in directing the company during his tenure,” noted R&B’s Frank Rowe. “We are all very proud to be part of this dynamic company and look forward to the future successes that we know will be forthcoming.”