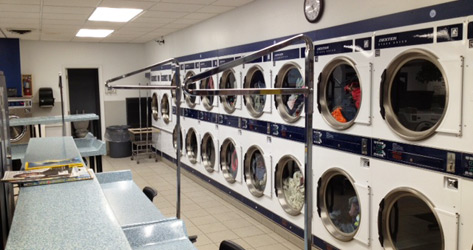 An energy-efficient retrofit from T8 fluorescent lighting to state-of-the-art LED tubes at Holmen Coin Laundry in Holmen, Wis., will deliver savings on the owner’s electric bill of more than 60 percent.

Owner Karl Maas operates 31 washers and 40 dryers at his 2,400-square-foot facility, which was formerly illuminated with 22 two- by four-foot T8 fluorescent fixtures on the main floor, plus some older backroom lighting done with older T12 lamps.

“I had been constantly replacing fluorescent tubes, and even some of the ballasts were starting to fail,” Maas said. “I had heard about LED tubes from a friend who recommended I look into changing over to this new technology.”

As opposed to a T12 or T8 fluorescent tube that distributes light 360 degrees and relies on fixture reflectors to send much of its light to its target, the LED tube distributes light in a 130-degree beam pattern; all of the output is sent more toward the target.

Maas contacted Productive Environments, a company that creates and manages energy-efficiency and sustainability programs for companies large and small. With PE’s strategic partner, OEO Energy Solutions, an analysis of historical utility invoices, a survey of Holmen Coin Laundry’s existing lighting and an ongoing dialogue with Maas was undertaken – and an LED tube retrofit of the T8 fixtures was agreed upon.

“In this case, the LED tube retrofit was the most economical way for this facility to reduce its lighting load,” explained Larry Butz, partner at OEO. “There was no new fixture involved, merely a UL listed retrofit involving disconnection of the existing ballast, a simple wiring and lampholder change, and trading out the T8 lamps for the LED tubes.”

After installing a demo in a few fixtures, it was determined that replacing the T8 lamps one-for-one with LED was actually providing too much light output. A decision was reached to use only three LED tubes for the four T8 lamps.

“Being a 24/7/365 facility, lighting the place at night is a priority,” Maas noted. “The light output provided by using fewer LED tubes made this a great decision.”

At each existing fixture, the use of four T8 (32-watt) fluorescent lamps utilized 132 watts, including the ballast factor. The retrofit of each fixture to a three-lamp, 16-watt LED configuration reduced the connected load of each fixture to 48 watts, a reduction of more than 63 percent. In dollars, the retrofit figures to save more than $80 per fixture annually.

Including installation (handled by a local electrician), which can be completed in about 10 minutes per fixture, the cost for this project was approximately $3,300, and it will save Maas just under $1,900 per year on his utility bill – a payback of 1.7 years, or just under 20 months. Conservatively, the LED tubes (rated at 40,000 hours) will last six years at the 24-hour laundry before replacements need to be considered.

Over the six-year life of this retrofit, the $3,300 cost will spin off nearly $11,000 in utility savings for Maas’ laundry. What’s more, in reality, the lifespan could reach closer to 50,000 hours or more.

“Half the connected load and twice the life can be pretty compelling,” Butz said. “But the savings in real dollars year after year has a real and significant impact.”

OEO is also in the process of retrofitting Suds Laundry in Lafayette, Ind., with LED tubes, after sharing the success story of the Holmen Coin Laundry retrofit. Round-the-clock facilities like many self-service laundries are an ideal fit for cutting connect load. The lights are always on.

In addition, the energy efficiency does not have to stop at a mere lighting retrofit. Additional savings can be realized by incorporating motion detectors, ambient light sensors and other controls that can curb electric usage. And, depending on the size and mission of various areas of any building, new energy-saving technologies continue to emerge.

What’s more, depending on the local electric utility company, rebates are often offered to commercial customers undertaking energy-efficiency initiatives. Such rebates can reduce costs by as much as half.

In Karl Maas’ case, the LED tube retrofit for fluorescent was an easy decision for Holmen Coin Laundry. In fact, he is already planning a similar retrofit at his other laundromat in nearby Trempealeau, Wis.

“The old question of, ‘If there was a dollar on the floor, would you bend over to pick it up?’ applies here,” he said.

However, in this case, there’s $1,900 to pick up, year after year. Energy efficiency truly is the gift that keeps on giving.

• Superior light output directed toward a specific target (from four lamps to three).

• Retrofit is UL-listed when installed in any existing UL-listed fluorescent fixture.