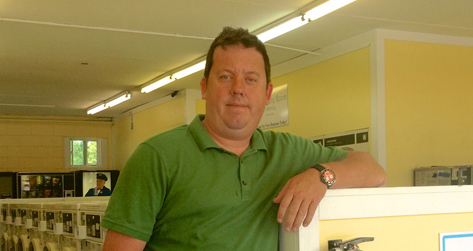 Erik Sparks has been a professional pilot for more than 20 years, having spent the last 18 of those years flying for a charter airline – Ryan International Airlines.

Over the years, Sparks has flown a diverse list of operations. Those include flying freight; sports franchises, including the Los Angeles Dodgers and the Chicago Bulls; and even the White House press corps.

“I have flown scheduled service for vacation tour companies, primarily from North America to Mexico and the Caribbean in Boeing 737s and 757s,” Sparks explained. “In recent years, I have flown military personnel around the globe, primarily North America, Europe, Eurasia, the Middle East and Asia in Boeing 767s.”

However, when Ryan International entered into bankruptcy and ceased operations in January 2013, Sparks focused his energies toward the self-service laundry industry – including the creation of an app called TPD Calculator, which he designed specifically to help fellow laundry owners track their turns per day.


How did you get into the self-service laundry business?


After the airline shut down, I began looking for my next venture. Over the years, I had flipped some residential properties with fairly good success. I was browsing properties on the internet when I ran across a commercial property in the same town in which my best friend owns a used car dealership.

He had been contemplating moving to a higher profile location, and this commercial property I had stumbled upon had a rundown building with an even more rundown laundromat for sale in a great location on Main Street. I was interested in the property and even more intriguing was the laundromat business itself.

I spent several months scouring the internet, reading everything I could find on operating laundromats and, more importantly, valuing them.

How long have you been a laundry owner?


I bought my current laundromat property in Stanley, N.C., on July 1, 2013. Later that same week, I bought the contents of another laundromat in Belmont, N.C. I took the best equipment from the two stores and refurbished my store. And I’m pleased to report that sales have nearly tripled in the last 11 months!

How many stores do your currently own and operate?


Currently, I have one rural store in Stanley, N.C., and am currently building a brand new store in Charlotte, N.C. It’s expected that this will become Speed Queen’s flagship store in the Carolinas.

How and when did you come up with the idea for TPD Calculator?


In my research leading up to purchasing my first store, I learned about “turns per day.” And, once I had my laundry rehabbed and had reequipped it, I created a fairly large spreadsheet to help with my accounting. On that spreadsheet, I had TPD formulas for each type of washer, as well as for all of the washers.

Please take me, step by step, through the development process.


I had downloaded Apple’s Software Developer’s Kit and done some minor experimenting with it prior to deciding I wanted to create TPD Calculator. However, with my limited skills with the SDK, I felt that reaching out to a professional developer was a better course.

I met with several developers and elected to go with a smaller software developer who was easy to work with. The app began with me teaching him what a TPD was and explaining my vision for the app on a sheet of paper. Within a couple of weeks, he had a prototype for me to download and test. I would critique it, we would discuss challenges we faced, strategize on overcoming the challenges – and then he would provide updated versions until we both felt it was ready for the Apple approval process.

How does it work?


It’s quite simple. Once you’ve downloaded the app, you begin by setting up a new store. You name the store, you list each type of washing equipment, the number of that particular kind and its vend price. Once you have all of that set up, the app is ready for you to add cash entries.

For example, let’s say that you have six 50-pound machines. You would count the revenue from those machines and add an entry in TPD Calculator. Using the total revenue, the number of machines and the vend price, the app calculates a turn per day. This takes place on each type you have and for your overall store, too. As you make the entries over time, you can track TPDs over weeks, months and quarters.

Why did you feel this was something that should be available to the self-service laundry industry?


As a pilot and a frequent traveler, I found an overwhelming number of apps in the Apple App Store related to pilots and traveling. In my experience with the airline, I used many iOS apps. I read technical manuals, viewed approach plates and en route charts on my iPad, while using countless apps on my iPhone.

So, I was quite surprised at the lack of apps in the App Store dedicated to the self-service laundry industry.

What has been the industry reception to your app so far?


I have had some a few interesting conversations with some industry leaders. Keep in mind, I have only sent out one press release so far. There has been no advertising for TPD Calculator. My new store in Charlotte has consummed quite a bit of time recently, so I have just let TPD Calculator “coast” for the time being.

Have you gotten any feedback from other laundry owners?


I have had some very positive comments on the app. Several people have reported that now that they have the app on their phone they are actually keeping up with their TPDs.

What one thing would you like laundry owners to know about this new app?


Since purchasing my store last year, I have done some shopping of other stores in the area and have been rather surprised at the number of owners who don’t even bother keeping up with their TPDs. I think it’s a great metric – which says a lot about your laundromat, your market and your community.

What other types of technology do you use in the operation of your laundry business?


I use Excel quite a bit. In the new laundromat we’re building in Charlotte, we’re installing Speed Queen’s Quantum Gold Wireless System.

In addition of TPD Calculator, what technology could you not live without?


My iPad! I use Excel on my iPad, I troubleshoot equipment issues with it, I read manuals on it, I view live video from my store on it and countless other things. It really is the hub of my business.

Do you have any other technological developments on the drawing board?


I want to create a more comprehensive app for the self-service laundry industry. I’m thinking of accounting/spreadsheet functions, maybe more comprehensive management tools such as maintenance logs that are tailored like aircraft logs. I think something for vending inventory/pricing/purchasing also could prove very helpful.

Breaking with Tradition
Minding Your Business
Timing is Everything