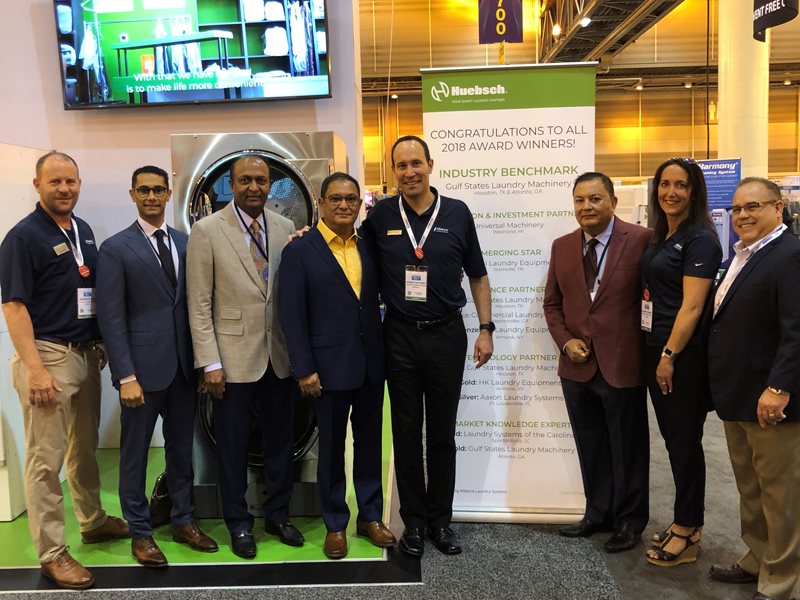 For the second consecutive year and fourth time overall, Huebsch has presented Gulf States Laundry Machinery Co., and its Houston and Atlanta branches, with the manufacturer’s highest honor – the 2018 Industry Benchmark Award (formerly known as the Distributor of the Year Award).

Serving laundry owners in southern Texas and Georgia, Gulf States previously received the top Huebsch award in 2011, 2014 and 2017. In 2017, the award came after the Gulf States’ Houston team was back in business less than eight weeks after its facility flooded as a result of Hurricane Harvey.

The latest award, presented at an appreciation breakfast during this year’s Clean Show in New Orleans, was just one of four honors that Gulf States received. Huebsch also recognized the company with its Gold Finance Partner honor for the distributor’s Houston branch; Gold Technology Partner honor for 13 installations, also for Gulf States’ Houston branch; and Gold Market Knowledge Expert honor for the company’s Atlanta branch.

“This distributor could literally have won an award in nearly every category this year,” said Kathryn Rowen, North American sales manager for Huebsch. “They continue to invest in their business and in their staff, and continue to learn and adopt new methods and technologies.

“The Gulf States team’s marketing knowledge and local connections are unparalleled,” she added. “But, most of all, their unwavering professionalism consistently delights their store owners, who continue to lead their markets with remarkably successful businesses.”

Parmar attributed the company’s success to its customer-first focus, as well as its commitment to be the best.

“We aim to be the expert, to share our expertise and to create opportunities for customers,” he explained. “That has allowed us to build a loyal customer base.”

Founded in 1984 in a garage in Houston, Gulf States Laundry Machinery Co. started out selling drycleaning equipment and began providing vended laundry equipment about 10 years ago.