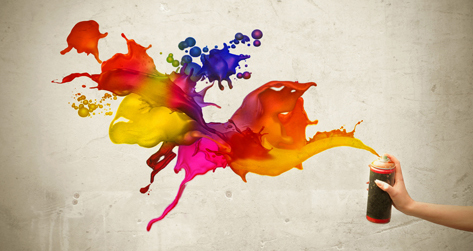 And think low and think high,

Oh, the thinks you can think up,

If only you try.”

Creativity has got to be the coolest of all the mental skills. After all, it’s responsible for every type of progress that humans have made – ever!

That’s kind of a big deal.

Going way back (and I’m talking about a caveman/prehistoric type of way back), creativity was born essentially out of basic necessity.

Non-Creative Prehistoric Person: “You know, living outside, all of this rain and snow and heat are killing me. I’m always sick. We’ve got to do something about it.”

Creative Prehistoric Person: “Here’s an idea! Let’s dig a hole in that big pile of dirt, and we can live in it. I’ve got it… we’ll call it a cave.”

Non-Creative Prehistoric Person: “Trying to catch fish every day by grabbing at them from the shore is tough. In fact, the other day, I actually fell in and chipped my front tooth on a rock. There’s got to be a better way.”

As time passed, we became more sophisticated and so did the need for much more creativity. Of course, the origin of creativity is curiosity. In other words, the more curious you are the more information you stockpile in your psychic “storage tanks” from which to draw upon when needed.

So, work on being extremely curious about all aspects of life, and it will pay significant creative dividends. Get interested in virtually everything.

The idea is that the more creative you are the more interesting your laundry can be and the more customers you will attract – and, therefore, the more successful you will be financially and otherwise.

In a previous column, I mentioned that what your self-service laundry should ideally have in common with all other laundries in your marketplace is nothing. The intended meaning was, of course, that your store should be so unique, magical and alluring that it constantly creates a major, hard-to-avoid “positive ruckus.”

I know that many laundry owners have creative instincts and want to do creative stuff with their businesses. However, too often, they’ll have great ideas and, just as they are about to put them into the game, there’s “a flag on the play” – which stops them in their tracks.

Yep, the dreaded fear of failing. Don’t be embarrassed if that’s you because it’s quite common. But, in reality, everything you want is just on the other side of fear. The idea is to grasp that, face the fear, deal with the anxiety and get through it. You can.

Many people have done this and achieved great success and satisfaction. Probably many more have not. It’s not easy, and it’s often uncomfortable. Then again, there is no rule that says human beings must never feel upset.

Growth comes from dealing with anxiety, and part of the uncomfortable aspects of anxiety is having a fear of anxiety. Don’t!

One of the greatest things about the human mind is that you can think without taking action. Thinking is actually experimental action, and it’s extremely cheap. Heck, it’s free!

In my case, I often “paper trade” stock options instead of actually placing the trade with real cash. I do this to “experience” the trade without real money at risk so that I can understand and get comfortable with the mechanics of the trade and learn from it. This prepares me for the real thing. It’s a dress rehearsal with no audience, and it works well.

You can do the same thing when you create new over-the-top marketing campaigns, loyalty programs and management techniques. Just play them out in your mind as if they are real, and you will be desensitized to them. Then, if you want to actually try them, you will do so with much more preparation and calmness. It’s a great technique.

Here’s a tip: if you focus your creativity on developing promotional programs for your laundry in which the perceived financial benefits (by customers) exceed your actual costs then you are thinking creatively. Under certain circumstances, offering free wash and dry can be a perfect example, because the only direct cost to you is the cost of utilities; however, it saves the customer the actual vend prices.

In addition, you don’t always have to be practical and follow the rules of marketing. That’s the “secret” to achieving unusual success. We all grew up being taught that the way to behave was to follow all of the rules and be practical. There is some truth to this, but in the world of marketing and advertising your laundry, the “Wow Factor” doesn’t come from following the identical route as everyone else.

Most well-trodden paths lead nowhere, and it’s only the pioneers who discover new territory. Saddle up and be one.

• Tom Monaghan built Domino’s Pizza by creating the concept that, if the pizza is not delivered within 30 minutes, it’s free.

• Bill Gates essentially made the internet usable to all of us.

All of these folks recognized unsatisfied needs and then created ways to fill them.

Clearly, self-service laundry customers have unsatisfied needs, too. For example, the invention of the stack dryer enabled laundry owners to provide twice as much dryer capacity in essentially the same amount of horizontal space, making the task of doing laundry much more convenient for laundromat customers.

What unsatisfied needs do your current customers face? Find them and create ways to fill them.

It’s all about creativity. Here’s the formula: Need + Creativity = Wow!

There’s a joke that Proctor & Gamble’s original intention with Pringles potato chips was to make tennis balls. However, on the day the first shipment of rubber was supposed to show up, a large truckload of potatoes arrived by mistake. Fortunately, the head of the new Pringles brand was a relaxed, creative guy; he simply said, “The heck with it… cut ’em up.”

Seth Godin is a brilliant and creative marketer. He’s written many (very good) books on the subject. In his latest, he relates this true (according to him) story about marketing creativity:

“When there were old school parking meters in New York, quarters were precious. One day I was walking down the street and a guy came up to me and said, ‘Do you have a dollar for four quarters?’ He held out his hand with four quarters in it.

“Curious, I engaged with him. I took out a dollar bill and took the four quarters.

“Then he turned to me and said, ‘Can you spare a quarter?’

“What a fascinating interaction.

“First, he engaged me. A fair trade, one that perhaps even benefited me, not him.

“Now we have a relationship. Now he knows I have a quarter (in my hand even). So his next request is much more difficult to turn down. If he had just walked up to me and said, ‘Can you spare a quarter?’ he would have been invisible.

“Too often, we close the sale before we even open it. Interact first, sell second.”

Hopefully, you can now view creativity in its total dimension. There are many aspects of your self-service laundry that can benefit from creative thinking, such as (but not limited to) attracting customers, retaining customers, ancillary vending, attracting commercial accounts, attendant management and financial issues.

Want a stronger, more positive cash flow in your laundry? Then become dissatisfied and get your creative juices to flow. You’ll find that they will flow very nicely together.

A while ago, I came across an example of creativity that is so outrageous, totally off the wall and humorous that I just had to include it in this article. Needless to say, it’s not recommended but it’s extremely creative, in a perverse sort of way.

This was printed in the London Times:

“Outside England’s Bristol Zoo there is a parking lot for 150 cars and eight buses. For 25 years, its parking fees were collected by a very pleasant attendant. The fees were one ticket for cars ($1.40) and five tickets ($7) for buses.

“Then, one day, after 25 years of never missing a day of work the attendant didn’t show up any more. So, the zoo management contacted the city council and asked them to send them another parking agent.

“Meanwhile, sitting in his beautiful villa somewhere on the coast of Spain or France or Italy is a man who’d apparently had a ticket machine installed completely on his own and then had simply begun to show up every day, commencing to collect and keep the parking fees, estimated at about $560 a day – for 25 years.

“Assuming seven days a week, this amounts to more than $5 million – and no one even knows his name.”

More Thoughts Off the Top of My Head
The Obstacle Becomes the Way
Get Psyched Up!